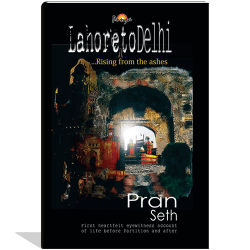 The book is a first heartfelt eyewitness account of life before India Pakistan partition and after.

It brings alive how the political environment of the time impacted everyday lives of people as India moved towards Independence. The author, Pran Seth spent the first twenty –two years of his life in India which is now called Pakistan. Born in the old city of Lahore, he witnessed the Independence movement take shape and then succeed under the leadership of Mahatma Gandhi. As a budding journalist he followed the rise of Mohammed Ali Jinnah and the demand for a separate homeland for Muslims. The author gives his analysis of the leaders of the time and the events which led to the partition of India.

The book also paints a very honest and at times hilarious picture of the social set-up in a typical Hindu "mohalla" (locality) in the heart of Lahore. It gives an eye witness account of the mayhem which accompanied the India and Pakistan partition. The author describes events of that time as he saw and experienced them.

On arrival in India, his first assignment was to report on the aggression in Kashmir. He gives firsthand account of the events. Later, he sat at the feet of Mahatma Gandhi in his prayer meetings daily till he died at the hands of an assassin. Hyderabad followed almost at the same time and the author rushed to the scene to write about the story. He was there before General Choudhry's forces marched in and saw the surrender of Nizam in Hyderabad. In recalling those events, Seth manages to convey how they were not some distant historical events but very personal experiences which generated pride in the new India emerging larger than what had been inherited by us from the British after ceding Pakistan.

At another point in the author’s eventful life, he had to opportunity to observe closely how the East Punjab Government handled the problem of refugee rehabilitation. He recollects with utmost honesty and admiration, the efforts of the key administrators to manage this colossal of assignments - the rehabilitation of over 5 million people at one go in the land much smaller than what Hindus and Sikhs had left in Pakistan. He had a vintage seat to observe all this- and now he shares it with all in his must read book Lahore to Delhi.......Rising From the Ashes